A totally whacked comedy but with an uncommon good spirit 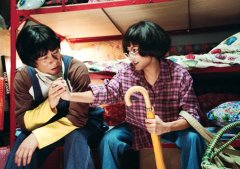 Excellent actors who "overplay", visual gags, a screenplay without an actual plot, Fantasia, as the title indicates, is a crazy and fanciiful comedy as they know how to make them in Hong-Kong. The movie is a succession of wild scenes mixing characters, all more stereotyped than the others. Unsorted : three cheap private detectives (Lau Ching-Wan, Louis Koo Tin-Lok & Jordan Chan Siu-Chun), a crazy witch (Cecilia Cheung Pak-Chi), teddy bear (more like a teddy dinosaur, actuelly) with colored evacuations, a gangster with hilarious comical expressions (Francis Ng Chun-Yu), a cracked cousin, multilingual and martial arts specialist (Christy Chung Lai-Tai), the Chopsticks sisters (The Twins 1 & 2), afro haircutted triad members, and others ! And this film is nothing else than a succession of characters and small scenes, sometimes without much links with the others, oftenly completely useless to the story, but sharing the same common point : drawing gales of laughter out of you.

The screenplay starts on an already used base (the lamp's genius trick is not very new) and because of it, the beginning of the film is less punchy. But you quickly understand that this so-called plot iq only an excuse to place the characters into situations as impossible as hilarious. There's one thing certain, the atmosphere on the set must have been really great (you can see that in the making-of). 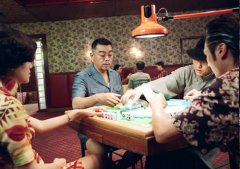 Lau Ching-Wan and Francis Ng are just screamingly funny, specially in the mahjong scene (I'm still laughing !). You enjoy watching Cecilia Cheung, as comfortable here than in Lost In Time, way more tragical. Besides, she remains really cute despite her Mushroom like haircut and gigantic glasses. Louis Koo keep the level at the same height than his talented partners, and it's already more than I thought he could do. Jordan Chan is great in his supporting role, and Twins don't amaze you, but don't stain the whole neither. You should've understood, despite their way to overplay every scene, this bunch of talents widely contributes (and even make) the general good mood coming out of this comedy.

Wai Ka-Fai direction, alone behind the camera, is rather classic. However, the film reveal a very good staging and beautiful costumes and sceneries, which make the movie estethically quite enjoyable, among other things, thanks to a very pretty cell-shading flashy title. The music is just like the rythm of the movie, colorful and swinging.The idea to lay the scene in the 60's enable the crew to use sceneries (locations) but mostly costumes all more kitschs than the others. Francis's gaudy shirt, his followers's afro haircuts or Twins's haircut, Lau Ching-Wan kind of colonial look...All of this brings a small crazy touch which reinforce the comic effect in some scenes, I remind you, we're in a rather demonstrative comedy. 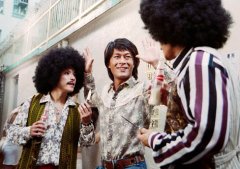 Wai Ka-Fai, by placing his film in the late 60's (most prosperous time for Hong-Kong), remind to hong-konges people in thesedarker days that this wonderful time did happened, and that the lull may not be far (2020 ?). He gives anyway for his third movie a big mess, however filled with a communicative good mood.

In Brief, for me, Fantasia deserves a maximal note as he made me laugh so much (and I mean laugh, not just smile). However, I only put the note above because using dipassion, I think that some people will be repulsed by the overacting of the actors/ess and heavy gags. But for the other people, I aboslutely recommend it, cause you just get out of this film with a smile on your face.