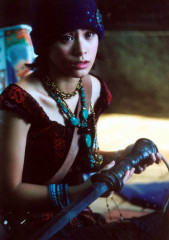 Given the cast and crew, Twins Effect finally delivers what was expected. It's surely not a masterpiece of action. But Ekin Cheng is not Bruce Lee, Charlene Choi is not Michelle Yeoh, Gillian Chung is not Cynthia Khan, and Anthony Wong is not Jet Li. Everybody knows that. Of course Donnie Yen is in the place, all the kung-fu fans are getting nuts. But he is just the action director, and does his best with the cast. Then there is a very cheap storyline, but with the HK touch, a totally stupid mix of genres, giving a special taste to this blockbuster.

The main interest here is clearly not the story. A bad vampire wants to rule the world, he needs to find and kill the 5 vampire masters, then he can walk in daytime. Yes, it sounds like Blade. The Wesley Snipes' movies have a very obvious influence on this movie (the death of the vampires, for example). But then, is there some teen romance and totally silly comedy in the Blade series? No way. There is only in Hong-Kong that you will find such a silly attempt. It's not perfect of course, but at least, it gives a special touch to the movie. With the Twins and Edison Chen in the cast, it was pretty obvious that it couldn't be ONLY an actioner. The romances are sadly quite uneffective, mainly because the comedy part is killing any potential feeling for the characters. Also, the movie is lacking rythm in the middle, with several romance or comedy scenes lacking interest. But then, this comedy part is not so bad, with some very silly memorable quotes: "But I'm a vampire!" "I have dogs at home, why not a vampire?", or "it's not because you are a vampire that you can dump me like that!". And even during very dramatic fight scenes, there are some jokes to remember the viewers that it's just for the fun. That's obviously a good choice, because with such an average storyline and unskilled cast for action, it's virtually impossible to keep an efficient serious tone. 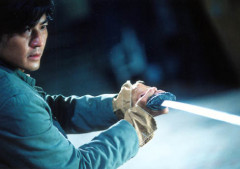 Then about the fight scenes, given the cast, they are quite good looking. Of course, it's edited, too edited. But it was expected. Donnie Yen still succeeds in giving his touch to the fight scenes. It's quite violent, with some kicks, and a good use of blocks and throws. The SFX are quite well integrated, and are clearly not shamefull compared to some recent movies like Blade 2 where the use of CGI are sometimes less efficient than the wires. For genuine kung-fu fans, Twins Effect is surely not a great movie. For fans of sci-fi action, it's certainly not a waste. The choregraphies of Blade 2 for instance are maybe less edited than those ones, but also less original. There are some very nice moves here, and it's of course totally unrealistic.

As a conclusion, I would recommend Twins Effect to people who are excepting what the cast and crew is supposed to give, and not what they would like to see. Twins Effect is an uneven silly actioner, it's full of pop stars and not martial artists, once you have integrated this fact, the movie is very pleasant to watch, despite an obvious problem with rythm and coherence. It could have been much better, of course, but also much worse (Skyline Cruisers, anyone?).