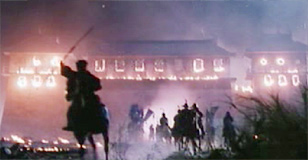 Moon Warriors is a sword film rather interesting aven though it's far from revolutionizing the genre. Indeed, Samo Hung Kam-Bo, Corey Yuen Kwai and Ching Siu-Tung stick to the minium in terms of fights, while on characters side, it is pretty cliché except for the nice role of Ah Fei (Andy Lau Tak-Wah)

Fei lives quietly in his small fishing village with his old aunty and his killer whale Hai Wei when he saves from an embush the 13th prince Yen (Kenny Bee Chan-To) incognito and his guards led by Hsien (Maggie Cheung Man-Yuk). The prince, actually hunted down by his own brother, asks Fei to bring back the Emperor and his daughter Yueh (Anita Mui Yim-Fong) whose he's gonna fall for.

The atmosphere is quite enjoyable with a little bucolic side between fishing village and fights in the wood. Talking about fights, although tey're quite honnest, are sometimes a bit rushed, if not bluntly dashed off, which is pretty amazing regarding who lead the thing.

Andy Lau let himself go on this role and radiates authenticity in romantic scenes as well as in much simpler scenes like the moments when nobles shout out a verse while Andy siply answer that he doesn't understand, lack of education. Kenny Bee plays his prince role spotlessly while Maggie Cheung and Anita Mui come out really good despite roles quite narrow.

Sceneries are very well chosen and pretty unseen and the whale idea is amusing and again uncommon. The music is also light and enjoyable and come with a nice Andy's song.

In Brief, without being a monumental wu xia pan, Moon Warriors thanks to sceberies, actors and a few peripherical components pretty efficient, remains a good typical movief of the genre which'll make you spend a rather good time.