"Psycho-blockbuster" rather interesting but quite complex 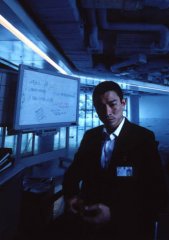 First, I will try to draw the plot of that Infernal Affairs 3 (not really easy !). The story begins shortly after Yan's death (Tony Leung Chiu-Wai) and seems first to point toward Andy Lau Tak-Wah's situation (professionnal & psychological). Then you learn about the existence of others "Goo Wak Jai" infiltrated in the police like him ; it is true that Lau wasn't apparently alone to be sent by Sam in the opening scene of the first episode.. That's when Leon Lai Ming's character is presented, and his relation with Cheng Dao-Ming (the emperor Qin Shi-Huang in Hero). From then the movie, through many leaps in time, evoluate on two temporal plots : the first one which you could place after the 1st episode. Everything happening in there has a direct link with the past (simple pretext to see Tony, Anthony, Eric and the others back). The second temporal plot is situated a few months before Yan's death, that is to say a bit before the first episode.

It is clear that the scenario (even more than for the 2nd opus) is getting around the story of the first episode. Which proves that this so-called trilogy wasn't written in advance, but from one successful scenario. Nevertheless, Alan Mak Siu-Fai had left (willingly ?) enough elements to make the whole consistent.

The 2 replaced elements from the 1 or explained the origin of them without never sending you back to it visually, while here it's the same characters (actors) in the same moments than previously ; you can even see some scenes from the 1 (ex : on the roof). Anyway, you should have understood, you must really pay attention to follow the storyline of this third opus. But if you adhere to it from the beginning, it works and you follow with a detective interest the evolution of the protagonists.

Because Infernal Affairs 3 is in fact analytic. The "sub-plots" dropped here interests less than the true psychoanalysis of the characters which are proposed. Through the treatment much darker than the two first ones's, this movie reveals a lots of unexplored sides of the characters. In that matter, after an almost kind Eric Tsang Chi-Wai in the 2, you see here a Tai Lo who barely care about his men (several scenes where he sends Tony Leung to his death). We meet an excellent Andy Lau again, becoming completely schizophrenic after Yan's death. He seems to blame the whole world for not letting him make amends for his sins, but yet he keeps working against the law and the morality. Funny detail : the only flashback scene where you see Andy Lau, he wears a cap wrapped around his head in order to hide his shaved head (Andy had just left his monk role from Running On Karma...). Tony Leung is rather disappointing compared to his performance in the first episode. He's here...but only just (maybe it's the lack of legitimacy of his presence in the story that bothers). 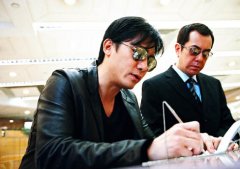 It's also harder for Kelly Chen Wai-Lam to convince as she gets a bigger role here.

The photography is spotless, with a few interesting shots (elevator shot). The action isn't as present as before and gives way to descriptive and illustrative scenes. This episode is far less visual than its predecessors and maybe it's precisely the weak point in the direction. You really have the feeling that Andrew Lau Wai-Keung didn't get the grounds of the screenplay and that he wants to show the actors too much instead of letting them do their job and simply watch them as much as we do (too shame with such a cast...). And maybe that's this lack of importance which weights on some performances. The music isn't as poignant but still keeps its theme so "great saga" like.

In Brief, for those who liked the two first episodes, Infernal Affairs 3 concludes the saga in a rather good but mostly very dark way. But let's remind that the three films begins and ends on buddhist sutras on hell, "without space or time limits", "with no way out". Maybe we should see there that he characters are actually stuck from the beginning into this "Continuous Hell". However, the storyline happens to be so complex, that if you don't get caught by it, you'll drop the movie after the first half hour.

Review based on the Director's Cut