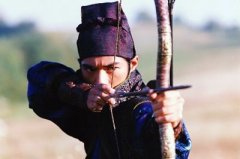 Here finally comes House of Flying Daggers, the latest Zhang Yimou's movie recently screened in Cannes. First of all, it's important to precise that the english title should have been The Lovers wich is way more representative of the main theme of the film. Indeed, although HOFD shares the same international desire than Hero by its clean photography and the presence of Hong-Kong stars in the cast, when heroism was the main theme of the first one honnor, virtue, sense of sacrifice...), it's of love that the second one talks about.

The movie starts immediately with a magnificent danse scene followed by a strange challenge : the echo game wich ends up in a stunning duel. 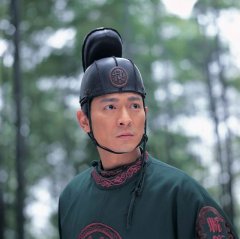 The story starts well, the characters are interesting, however, after two third of the film, the scenario gets tortuous. Without revealing anything, I would just say that we assist to a improbable succession of twists and suspens scenes calling for outcomes as improbable wich loose us more than anything else. The story and the protagonists indeed stay pretty unlit, but by dint of pulling the strings of revelations in the second part of the movie, we fall on a scenaristic knode wich jams the whole thing.

Actors are good : Takeshi Kaneshiro is excellent, as he surely gets the most interesting role but who gives us the best performance. Andy Lau Tak-Wah is good and never does too much but seems to be disturbed form times to times by the mandarin language (the entire film is a mandarin). Zhang Ziyi, on the other hand, seems to hardly progress since Tigre & Dragon... We can oftenly hear say that she always gets the same kind of role, but maybe she's the one to give us the same kind of performance all over again.

The photography work is gorgeous, with a over-use of color filters (example : the scene literally green in the woods). There's some magnificent shots in the action sequences as in the romantic scenes. Costumes are beautiful, thanks again to Emi Wada. Tony Ching Siu-Tung amazes us with battles scenes way more diverse than in Hero : swords, hand combat, bows, flying daggers... All the fights have the excellent common point to be in motion

, no stasis, as the characters runaway most of the time, they fight in the run. The original soundtrack however, is a complete failure. Musics are really disappointing and weight on some scenes instead of lighting them.

In Brief, it's a mixed feeling that gaves us House Of Flying Daggers. The movie has a lot of excellents sides, starting with its outstanding battles, however, you don't make a great film with a half of scenario, and that the case here.

A must-seen, but knowing all this...