King of the monsters 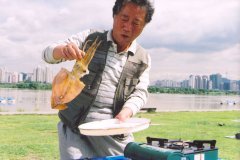 Due to the success of Memories of Murder both at the Box Office (in Korea) and for film critics (in the West), The Host was a very much awaited movie. Bong Joon-Ho's return to filming finally leaves a positive impression. First half of the movie seems like a permanent firework. Uninterrupted shifts in tone are very well handled and the manga influence on the frame working never feels like overstylization. The screenplay owes as much its humour to the Koreans' reaction to the monster and the medias as to its ridiculous american characters. And the movies never falls into the trap of cynicism. Let us mention the casting's energy. But the movie does pay its risks by some minor limits. The movie does have some decreases of intensity in its middle. And some of Bong Joon-Ho's ideas were too much seen in bad mainstream Korean cinema: too frequent use of a classical score to produce dramatic intensity, torture turned into a joke... Anyway, The Host is a new excellent movie by Bong Joon-Ho.