Beautiful movie about a man for whom the ring is the only way out... 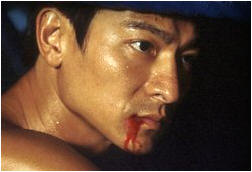 A Fighter's Blues is actually nothing more than the title announces. After a "shoot yourself" kind of drama and a romantic thriller not very hopeful, Daniel Lee Yan-Kong continues on this melodrama track with this movie, story of a man whom was made by boxing and destroyed by boxing...will boxing build him back ?

The plot is simple, Mong Fu, a hong-kongese thaï boxer (Andy Lau Tak-Wah), is released from prison and looks for his daughter, only legacy from his past love Pim. He meets a sister (Takako Tokiwa) who manages the orphanage which her daughter grew into and who will help him to get in touch with the girl. However, beyond the pardon he seeks from his ancient love by taking care of their child, he quickly sense that his ultimate forgiveness can only be granted on the ring, where it all began.

The movie is a tear-jerker alright, it's ture that certain scenes will intoxicate more than one, but as for any story, cause this film is Mong Fu's story before anything else, some won't feel concerned at all and some others will be deeply touched. And if the character's suffering and issues inspire you, you'll get caught and the so-called absurd scenes like the one at the end won't be ones to you.

SPOILER At first, Mong Fu is a man who believes in nothing, he clearly says that muay thaï doesn't provide him any sensations, it's just a job for him, a way to make big bucks. It's for the same reason that inspite of the peril threatening his young couple with Pim, he accepts to go down for money, thus breaking the admiration his wife had for him. Because of this act, he doesn't only lose the love of his life but also his freedom. When he gets out from jail, he learns about Pim's death and everything would make you think that this news will finish him off and it's partly what happens, although he soon undertsands that some things are waiting for him before he has to die. And instead of giving everything up and thanks to the duty he has toward his daughter and to the uprising love he shares with the sister but mostly thanks to the fact that he owes a debt to the ring, he's gonna decide to settle a few things before giving up. But for a moment, he dares to believe in happiness, he catches sight of hope : the sister bounds with him, he rebuild the orphanage, teaches boxing to his daughter's boyfriend and get closer to his girl... But during a fight, his past catch up on him, and from that point, he knows that this passing joy was just an illusion and he therefore understands that on the ring too, he must obtain absolution, absolution that he'll find only in death. END SPOILER 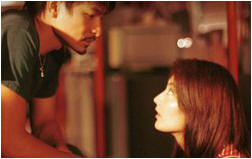 Andy Lau gives us in A Fighter's Blues the best performance that I've ever seen from him (and I saw quite a few of his movies...), he seems to have acquired in this film an impressive playing maturity and evene his detractors can only notice the guy's performance. Takako Tokiwa doesn't really amaze but remain honnest though, the children on the other hand, (except Mong Fu's daughter who is quite good) don't even fulfil their comic reliefs part as their dubbing was skimped on.

The visual direction is in retreat, it never steal space from actors who can freely play, it comes with a really delightful music cut by Andy's song, not really in line with the rest of the soundtrack, but a great one nonetheless.

In Brief, if you aren't categorically allergic to movies a bit melo and if Andy Lau doesn't repel you, then watch this movie. A Fighter's Blues, inspite of being one of Daniel Lee's masterpieces and one of the greatest Andy Lau's movie, discloses itself as an excellent film on the journey of a man whom only the ring can bring peace to, a masterpiece...