As Tears Go By

A triad romance with Andy Lau, alright, but quite simple and without too much cliché 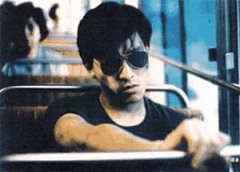 If you're willing to watch a good Wong Kar-Wai movie, As Tears Go By isn't really the right choice. Not that the film is bad, but it's however the first movie of the director now internationally acclaimed, which imply that he doesn't truly share his well-known visual and narrative approaches here. You can even almost see in this movie a commercial compromise to the famous mobster romance genre in the only purpose of producing two years later his true first film : Days Of Being Wild. Because you don't really find the WKW's touch so particular, the rythm is very different and, once more, seems to respect the specific codes of that kind of films.

It's the story of a low-level Tai Lo ("eldest" = boss) who has for Sei Lo ("younger" = follower) Fly, played by Jacky Cheung Hok-Yau, a loser who only manages to attract troubles on the one responsible for him : his boss, played by Andy Lau (simply named here Wah-Jai, which is nothing else than the nickname whereby everyone in Hong-Kong calls Andy Lau Tak-Wah and which literally means "Wah child" or "young Wah"). However one day, a girl (Ngor, played by Maggie Cheung Man-Yuk) comes and shatters Wah's little world, whom for a moment, dares to believe in happiness, far away from the triads and its killing. But his "young brother" always brings problems until the day he's gonna go too far.

SPOILER Originally, Andy Lau wasn't supposed to die at the end, the bullet he takes settle for paralyzing him definitely, leaving Maggie Cheung silent and impotent to that tragedy, just taking care of her crippled lover...END SPOILER 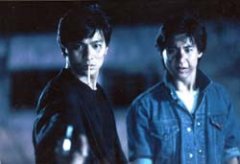 The atmosphere is rather classic, you have the strange feeling to be in front of A Moment Of Romance, only that ATGB is older, as no concessions was made to the symbols of the genre. Andy Lau slips on his usual "young handsome triad member top-cool" role which he knows so well. However, if in most of the films of this type he's made he had no strings attached in order to reinforce the "I've no future because nothing holds me back" side ; here, he has a responsability, his younger brother's one for whom he always bears, whatever it costs. And it's through this point that the final stake outweighs the other films's, for Andy must choose between living his life with the woman he loves and helping over and over his friend, running the risk to loose everything.

Actors are great, Andy Lau is still his same oldself and Jacky Cheung already shows his great talent. By the way, the two of them make a very efficient duet and seem to get along pretty well as you can feel a real complicity between them, especially in the scene when the two of them, completely stoned, smoke on a doubtful stuff (who said joint ?...) while playing with a dog. Maggie Cheung doesn't really amaze and you will hardly believe, in terms of playing as well as physical beauty, that she could have got such a ripeness in such a short time, as the difference with Days Of Being Wild's Maggie is unsettling. 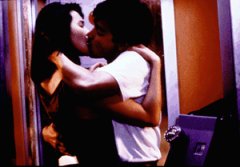 The visual direction doesn't bring much although a few steady cam shots, accelerated and blurred (like Ashes Of Time fights) can be found. The music is quite well-used, with 80's rock-like chords, however, placing a cantonese remix of "Take My Breathe Away" opening on Andy Lau wearing sunglasses strangely alike a pair of Randolph (US Air Force pilots regulary brand), knowing that As Tears Go By went out not two years after Top Gun, is a choice more than questionable and, even if it brings an undeniable romanticism more or less effective to the film, it still stinks like an easy commercial reference.

In Brief, even if you don't really find the Wong Kar Wai's touch here and that Andy Lau's role has been polished and reused in numerous triad romance like this one before and after, you still find in As Tears Go By a few good ideas and a nihilist scenario (as usual for a Wah-Jai movie...) although hopeful through Andy Lau's character. A rather enjoyable film for amateur of this kind of movies, and for WKW's stouthearted fellows.