Pen-Ek: When I wrote the script, I thought the result would be that the young couple, the bar tender and the maid, they would be a reflection of the old couple. Perhaps several years ago, the older couple was  like this younger couple. And I thought that the older couple would also be a reflection of the younger couple: perhaps several years from now, they will be the same. That's what I thought would be the result when I wrote the script.

But after I finished and I actually watched the film, the result became quite unclear. It depends on the people who watch the film. Some people thought that the movie is trying to say "sex is better than talking". For myself, when I look at the film, I thought that something interesting has happened. It might try to say that if you have a relationship, it's going to go wrong anyway. But if you think the relationship is good, is valuable, is worth keeping, pehraps you should do both. You have to discuss, you have to have sex. The combination might make a relationship balanced. You cannot always control your filming. When you are writing, you think this is going to happen, but...

In Ploy but also in Invisible Waves, people stay in small places, and for a short time. Why this choice?

The obvious reason would be the budget (smile). I have very little money to make films. In life, you exchange. If you take a lot of money from people, your freedom is less to make the kind of film you want to make. If you take little money, you have freedom. And my favorite places are for instance toilets, corridors, hotel rooms. I stay in a lot of hotel rooms because I travel a lot. Airplanes cabins too. I'm good with these kinds of places. If I go out to New Zealand, with this beautiful nature, I don't know where to begin to put the camera.


You could also show the characters at home, not on travel. Is it more interesting to show people when they are not safe at home?

I think it's interesting when people are not so comfortable. They become more honest. If something happens, you get really scared, and you react without hidding your feelings. But if you are at home, perhaps you can hide things, you can hide your feelings because you feel more secured.

This is just a reason because you are asking, actually when I was doing it, I did not really think about it. When I start writing, I just throw the people in my films into the worst possible places and see how they deal.


There are plenty of things which are not very clear in this film. The characters imagine things and the audience cannot know if it's real or not. Do you like not to explain everything?

Absolutely. But when I wrote the script, even perhaps when I shot the film, I had the explanations. But when we edit the film, we decided to leave something out. To leave some explanations. Perhaps it's my habit, I don't know if it's a good one. When you make a film, you are playing a game with the audience. It's almost like you are having sex with the audience. It's part of the game not to explain everything. You have to balance things of course, you cannot make things too unclear, because the audience would lose interest then. But you always try to explain just enough, and you and the audience kind of dance together, just for the experience.


Can you tell us about the process of making film? In your last movies, the tone became quieter and quieter, compared to the first ones.

Yes, my films became slower. To be honest, I have always admired this kind of film. I like Bergman's films, I like the quiet Woody Allen's films, the one that people don't like. I like Kieslowski's films very much. Unfortunately we won't see any more from him. I have inspiration to do this kind of film. I didn't study film, I didn't have education. 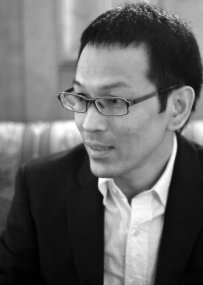 So I came to make film by accident. I didn't want to be a filmmaker! (laughs). I wanted to be a football player! (laughs). You know, like Thierry Henry or Zinedine Zidane. But of course my life didn't go that way, and I became a director. I like it very much though, I fall in love with the films and film making.

But of course, I didn't have education. In my very first movie, which few people have seen, Fun Bar Karaoke, I tempted, but it was a disaster. I didn't master the techniques. I didn't know how to make this kind of thing, so the film became very pretentious. I quickly made my second film to be more entertaining. Partially because I wanted to continue making films. And partially because I thought, perhaps, I should learn to make films first, how to tell stories, how to tell the audience to come with me. That's why I made the films you mentioned.

So I made another film called 6xty-nin9 then after that Monrak Transistor, and I became sick of this kind of film. They were too obvious. If you want people to cry you do this, if you want people to laugh you do that. And then suddenly I had a chance to work with Christopher Doyle, with investments from many countries. France was one of them for Last life in the universe. One of the actor was Japanese, ASANO Tadanobu. So there were many elements I was not able to control. You cannot control Chris, and I didn't know him very well at the time.

I thought "ok, perfect, I'm going to try to make the kind of film that i wanted to make, because I have more experience now. And since I cannot control all these elements, I'm just going to go with it". And try to be a bit more ambiguous with things. A bit more unclear. And I thought, if it's bad - and I thought that 80% would be bad - it will be my last film. Nobody would give me money again for a film. So I thought it would be my last film. I took the chance to make again that kind of film. And luckily the result is not bad. And in the way, through the process of making that film, I found this kind of film making that I wanted to do, I thought "now I know how to do it!". Ok, it was not perfect, but I could make it better the next time.

Since then I have been on a journey to make my film even more minimalistic.


So you think that you have found your own style?

So you could say that I'm on a journey to find my own kind of cinema. In Thailand I'm so sick of hearing people in the movie industry accusing me of not making a thai film, of working with foreigners, going to film festivals, etc... I'm so sick with that, I don't care. When I show my movie in France for instance, many people like the film. When I show my film in Somalia, many people like my film too. In Thailand, some people like my film, many did not.

So I though in the end, I stop believing in this country and nationality language and skin colours. When I talk to the people who like my film, like around the world, in Argentina, Brazil, Mexico, Sri Lanka, India etc..., they just happen to be the same kind of people. There are certain kinds of people. So if you meet the same kind of people as you belong to, you always like each other. You can always get along with each other, no matter what language you speak, and we all speak bad english anyway. Bad english has become another language (smile).


You said you are sick with making comedies. But if you look at Monrak Transistor, it's a very cheerful movie of course, but the main character is always having big troubles. Is it a topic you like? How people struggle with their problems?

I didn't say I was sick with making comedies. I'm sick of making films which are so obvious. Even if I make serious films it's not too obvious. But yes, I have this tendency to show the bad side of life. All that films are always about suicide and death, and people getting in troubles. I'm attracted to this kind of things and I show them in my films to try to understand what happiness is, in life.

Yes! And I think happiness is so overrated in life. Everyone wants to be happy! But life is so unhappy. And you have Georges Bush as the leader of the world, you can't be happy (laughs). In my country, we have all these terrible politicians. But I think that the problems that I show in my films, it's not to be hopeless, but rather to be hopefull. For instance like Monrak Transistor, a lot of bad things happen to the main character, but they all happen so that in the end, he could understand that the simple life is the best. "I was happy before, why did I try to change all these things??". So it was a way to try to understand what happiness is.


What's your next project?

I'm writing a supernatural film. It's a love story, but it's too early to tell. A guy falling in love with a tree. In Thailand you have legends, spirits that live in a tree or a rock. It's my attempt to do something good with the spirit of the earth. When people make a spirit movie or a ghost movie, they always make the ghost very bad, they always come to scare people. So I want to make the ghost nice in this film.